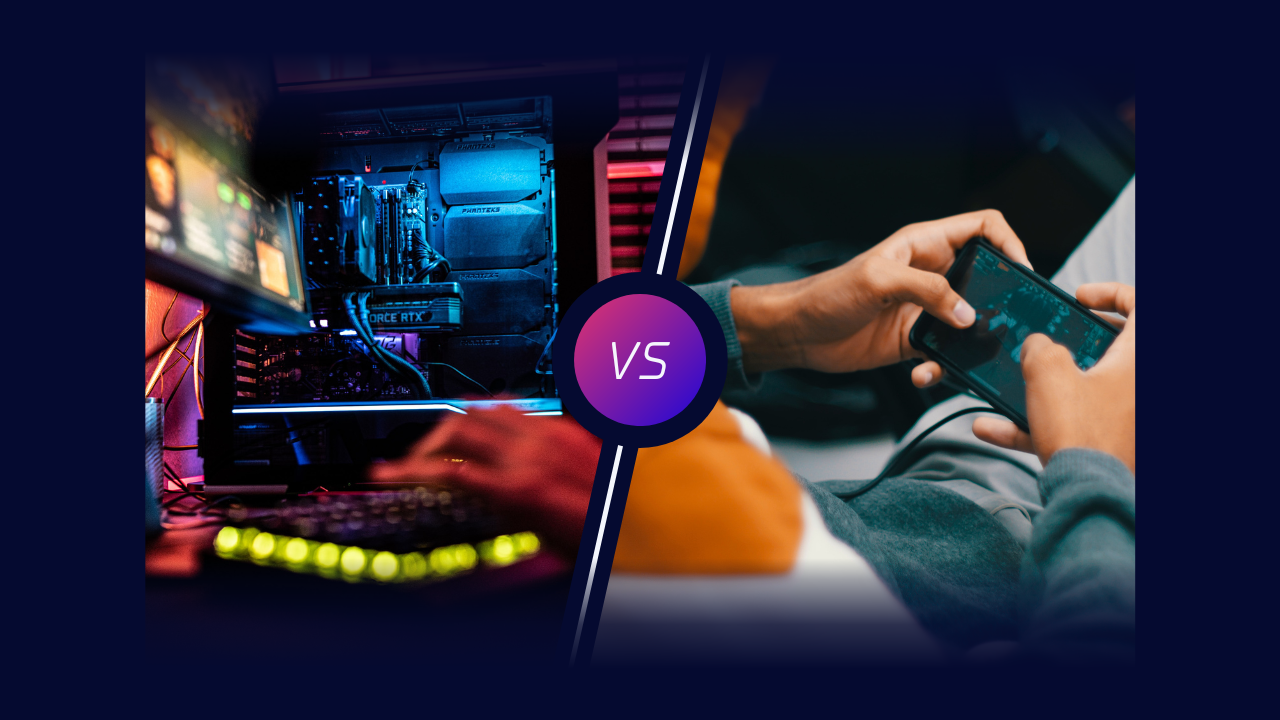 The Pros and Cons of PC Games and Mobile Games

It’s almost the end of 2022, and technology development in the gaming industry is still continuously thriving. Even though the mobile game industry has been rising tremendously for the past few years, some players are still insisting that PC gaming is better.
November 25, 2022
Share:

How long has it been since you first played the Snake game on your Nokia phone? If you look back and compare it with current mobile game technology, we have gone through a long journey to get here. There were days when we thought that to play a wholesome game, we have to install a PC and play it in only one place. But now, we can get satisfaction from playing games anywhere and anytime we want by the palm of our hands through mobile phones.

It’s almost the end of 2022, and technology development in the gaming industry is still continuously thriving. Even though the mobile game industry has been rising tremendously for the past few years, some players are still insisting that PC gaming is better. Pretty sure there’s no such thing as which platform is better because it depends on the user's needs and also what they think is more convenient. But, we manage to compile the pros and cons of PC gaming and mobile gaming so you can compare them and find out which platform is the most suitable for you.

For quite some time, playing games on PC has been dominating the gaming world, notably at the beginning of the era when the online game was hyped. It’s no wonder that PC games can attract many game players. PC gaming offers a higher graphic definition, a bigger screen, and a powerful processor for a wholesome gaming experience. Players can also choose their control devices between a game console or keyboard and mouse to suit them. This advantage allows players to have a more satisfying gaming experience. Players who own a gaming PC complete with the control devices are seen as pro game players because a gaming PC and all of their pieces of equipment are not cheap. Not everyone can own it and buy it easily.

But PC gaming also has drawbacks. Flexibility is not a thing that PC games can offer. Players cannot play PC games anywhere and anytime but in the comfort of their own homes or internet cafes. Affordability is also one of the factors that makes PC games cannot be played by anyone.

Nowadays, mobile game technology has been improving so much that it’s not showing any signs of stopping. With this progress, we can convince that mobile games will be advancing more and more and may even surpass PC games. Due to its flexibility and affordability, the mobile game market keeps increasing. Some people prefer mobile games because they can play anywhere and anytime. A study conducted by data.ai and IDC found that mobile games are outgrowing the gaming industry by 61% of the entire market, especially in 2022. Almost all people have smartphones now, and mobile games provide easier access for anyone to entertain themselves anytime and anywhere. This allows people who are playing games casually to join the gaming community too.

Despite all the flexibilities and conveniences available in mobile games, some consequences must be taken into consideration. Playing games on a mobile phone means limited space for memory thus affecting the quality of the game’s graphics and what kind of game you can install on the mobile phone. Mobile game players also have to deal with a smaller screen that will affect their satisfaction in playing the game. In-app purchases for in-game needs are most likely to be found on mobile games such as buying characters’ skin, a new weapon, or new characters.

So after you read all of these pros and cons between both gaming platforms, which one do you think suits you the most? Have you ever tried both platforms and compared them by yourselves?

As a game that is created in the modern era where people are more likely stuck to their smartphones, Eizper Chain realizes the potential of mobile gaming in the present time and the future. We want to provide Eizperians with the best gaming experience and we want to reach as many players as possible. This is the reason why we created Eizper Chain’s Mobile Version in the first place.

In the near future we will open a pre-registration for any players out there who want to try Eizper Chain’s Mobile Version. Don’t miss this rare opportunity and follow our social media to find out the exact date and time of the pre-registration!